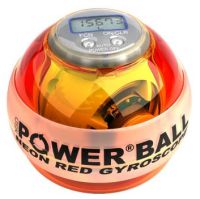 I have a new toy.  It's one of these, and it's rather cool.  Been eyeing up some of the more 'basic' (also cheaper) models for a while now, because it's a nice geeky gadget (woo, gyroscopes!), but this one is extra cool because it lights up and has a counter.

Didn't take me very long to get the hang of it, and over the last week I've managed to improve my highest score from about 7000rpm to 10,000 and figure out how to get it started without having to faff around with a bit of string.  I thought there'd be more of a strength difference between my wrists, but although the right one is stronger there's not a huge amount in it.  I can consistently get it to about 8000rpm with both hands now (the 10k was a bit of a fluke and as yet hasn't been repeated).

Anyway, I bought it from Play, along with a 'free accessory' - a leather case.  Which is utter shite!  I'd be very upset if I'd have paid actual money for it.  The ball doesn't really fit properly, which is a bit rubbish considering it's supposed to be designed specifically for it.  ah well.