So some Russian blokey got poisoned by some Polonium-210 and it's all over the news.
This has slightly pissed me off - not because of what actually happened, because radiation poisoning is not something I'd wish upon anyone - but because of the threat of mass hysteria from people who don't know what they're talking about. 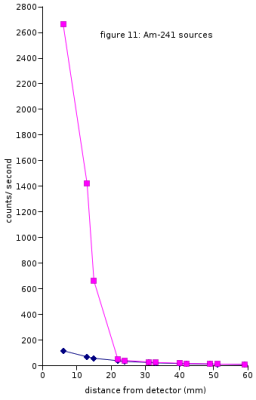 Polonium 210 is an alpha source. Alpha particles, also known as helium nuclei, are fat bastards with a pathetically small range. They can't penetrate skin (or anything else for that matter) and a few cm of air will stop them. If they get inside the body that's a different matter, but that's not the point here. Being on a plane that may have had some Po-210 on it at some point is unlikely to be a huge risk, unless you're intentionally eating/inhaling large amounts of it.

So the generally useless level of dodgy science and "OMG RADIATION = BAD!!" crap had been annoying me slightly, but I was mostly ignoring it and laughing. Until yesterday when I read this on the BBC's "10 things we didn't know last week":

"A geiger counter will not pick up traces of Polonium 210 as it emits alpha radiation, not gamma."

Oh reeeeeally?!
See that graph over there? That shows counts measured by a Geiger counter of two different Americium 241 sources. One of them was covered so only gamma radiation was emitted, the other uncovered so both alpha and gamma could 'get out'. I'll let you figure out which is which...
But my point is that Geiger counters can detect alpha particles, as long as they're close enough and their 'window' isn't too thick.

I'm also slightly suspicious about the statement that Po-210 only emits alpha, but I don't feel particularly inclined to dig through nuclear physics textbooks to disprove that right now.

Ahh, perhaps half a degree in physics does have its uses!