Winter dog walks this year have tended to get quite repetitive, and not involved venturing too far from home.  February seems like a good time to change that, so we picked a walk from the AA '50 Walks in Gloucestershire' book - Turbulent Tewkesbury.  This is one of the few walks in the book that doesn't have a map, so I had a quick look online and found that someone had already roughly plotted the route on OS maps.  Very convenient.

We started in the Vineyards, and (mostly) followed the signposted Battle Trail, with an addition to walk through Margaret's Camp. I know basically nothing about battles of the civil war, despite a couple of visits to Tewkesbury Medieval Festival.  At least I recognised some of the fields, and there are plenty of information boards to read along the way.

After a bit of pavement walking, we crossed over onto the Severn Ham and wandered along the river, crossing back at Healing's Mill.  From here, it was just a case of wandering down the high street and back to the car park - with a sneaky pub stop that coincided with a brief rain shower!

My ski holidays have, until now, all been booked fairly last minute.  But this time our Christmas trip got booked really early - in August!  We intended to have a quick browse of flight prices just in case of bargains, then sort the rest later - but instead found a very good package deal for a week of B&B at Hotel Serre Palas in Les Deux Alpes.

Jon is determined to properly learn to ski this winter, so our first morning was spent doing many slow laps of the nursery drag lifts.  He'd booked himself some afternoon lessons, giving me time to zoom around on my own at a more sensible pace.

I spotted the large queue outside the Jandri Express 2 gondola, and smugly thought to myself "sod that, I'll take the chair instead".  So off I went to the Glaciers lift, only to discover when I got off that it no longer goes as far as it did two years ago.  Great. Apparently the second part of it was moved to replace a different lift somewhere else.  The Super Venosc lift on the Vallée Blanche side also seems to have disappeared for this year.  hmm.

While I'm having a whinge, L2A still feels like one giant wide motorway of piste - all roads lead to Jandri.  I thought this last time we visited, but was hoping that with the resort having more snow coverage, and me being a much better skier, it might be better.  Nope.

I will forgive it because the runs down Signal are just as lovely as I remembered, and the restaurants/cafés/bars in town are good. For Christmas dinner we had a delicious tartiflette - our original plan of a giant bucket of fried chicken from Full Belly didn't work out as they were closed, so that had to wait for another evening.

a sunny day on the glacier

The majority of the week was lovely and sunny, though I did get rather blown away at the top of the glacier, and on one afternoon everything quickly vanished into clouds and I had some 'I can hear voices over there so that must be where the piste goes' fun. We also - mostly accidentally - found the viewing platform on the glacier, on a less windy occasion.

Unfortunately both of us came down with flu - Jon during the second half of the week, and me the day we travelled home.  As well as limiting our skiing ability, this also meant not eating a huge amount, pretty much no boozing, and then NYE spend flopped on the sofa rather than at a friend's house party.  Rock and Roll..!

When I last posted about my 'get the Strava 10k badge each month' challenge, I'd just failed at September because my race was too short and then I was too lazy to do another long run.  Happy to report that I'm back on track now!

October's 10k was another local race - but this time with a UKA verified course and entirely closed roads.

Well, mostly closed roads. Some sections were definitely closed off, some were possibly only closed in the direction of running, and other times there were just cars everywhere.  Maybe they were just being twats ignoring the signs, I don't know. It was cold, but sunny.  I'd gone for long sleeves, but no sunglasses. In hindsight, short sleeves would have been fine and sunglasses might have been useful.  Ah well.

Obviously I set off at far too quick a pace, but at least now I've sort of learned that lesson and did manage to slow myself to something more sustainable. In fact I only stopped to walk at the water station - because I still haven't figured out how you drink from a cup while running!

As we ran back into Waterwells business park, I knew we were near the finish line but couldn't see where it actually was, which was a bit annoying.  Turns out it was tucked away around a corner behind a building, so difficult to judge if/when to start on a sprint finish. 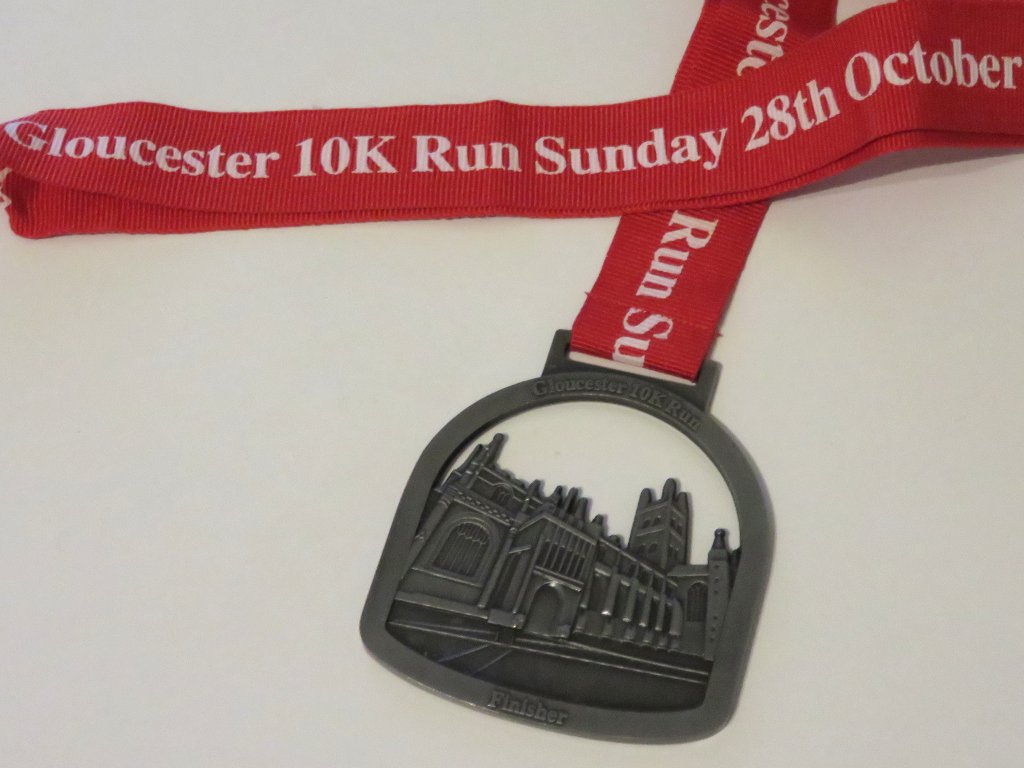 I'm really pleased with how this race went, especially as I set a new PB of 55.38!  The medal's quite nice too (even if my photography sucks)