Continuing the occasional series of "Katy and Abi go for walking with the dogs". Plan A was a weekend in Pembrokeshire, camping and walking some bits of coast path.  But then we remembered that Pembrokeshire is quite a distance away and the weather forecast looked a bit crap, so time for Plan B.  This involved flicking through several local guidebooks and maps and eventually settling on the Malverns.

Starting at Hollybush, we headed for British Camp via Millennium hill, then down to the Malvern Hills Hotel.  As it wasn't quite midday we debated if it was too early to stop for lunch, but decided against walking further as the rain seemed to be getting heavier.  Turns out this was a very good decision as it absolutely chucked it down the whole time we were eating.

As we left the pub after finishing our roast dinners, we noticed a sign on the door saying "sorry no dogs today".  Fairly sure that wasn't there when we arrived, as it's a very dog friendly pub - Tilly and Cai weren't the only ones in there by a long shot!  Maybe they were actually just running out of space to fit all the dogs in...

Our route back took us past the reservoir and skirted the edge of the woods before rejoining the track back to the car park.

About 10km in total I think, though as I didn't pause my watch while we were in the pub  it went a bit squiggly mad and added on some extra imaginary distance.

I've recently started a new job! I'll still be working remotely, but spent the first few weeks doing induction stuff and getting to know my colleagues in the actual proper office. In Kent.  This is very definitely not a commutable distance from Gloucester (I hate you M25/M26/M20...), so I was put up in an Airbnb for the duration.

The clocks had just gone forward - hurrah! - so what better way to fill my spare time than scouring OS maps for little blue triangles and/or other things to investigate.  Certainly better than spending all evening watching TV and eating chocolate (might have got fat and lazy over the winter. Again..)

First up, a walk to the Scene Farm trig point.  This is in the middle of a golf course in Hythe, and has some sort of ugly electricity box thing stuck on one side.  It's a mighty 97m above sea level - but then again, the sea is only about a kilometre away.

Next trig point is Cheriton Hill, which is just north of the Channel Tunnel terminal.  I parked in a layby just above the Folkestone White horse (not as old or exciting as you might hope) and walked along the footpath (North Downs Way/Saxon Shore Way) for a bit until I found it.

Not the most exciting of views on a cloudy grey evening

I hadn't seen a cylindrical trig before! You can also just about see France, which is quite cool.

I continued walking as far as Cherry Garden Hill, where I unexpectedly found a WWII pillbox. From here I returned via a lower path as loops are better than out-and-back - but with a steep walk straight back up the white horse (which it turns out is made of paving slabs) because I couldn't figure out where the actual footpath was supposed to be.  Possibly in a load of brambles...

We enjoyed our ski trip to Serre Chevalier a couple of years ago so much that we decided to go back and stay at Pinewood again - and take a few friends with us. 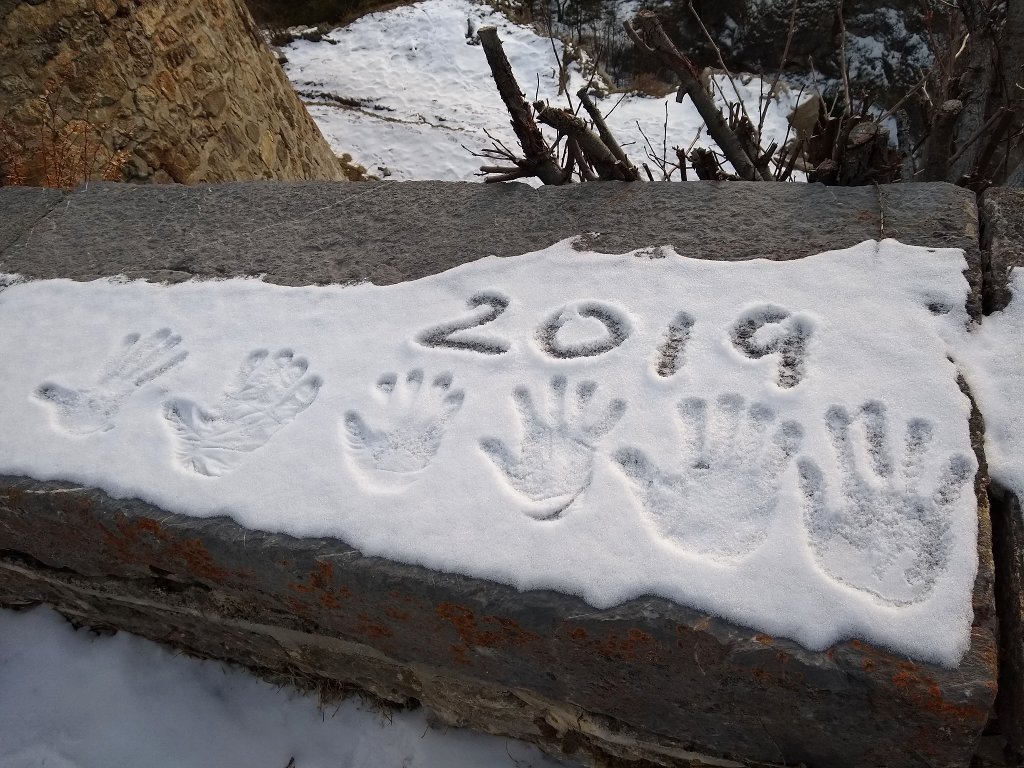 This was my first time skiing in a group (not counting skiing with new friends made in chalets, of course) and it was great fun.  Between six of us, we had abilities ranging from 'complete beginner' to 'could probably ski backwards with eyes closed' to 'not actually skiing on account of growing a baby'.  It was nice to all meet up for lunch though - and to stuff ourselves with cheese fondue and steak at Petit Pont on chalet night off.